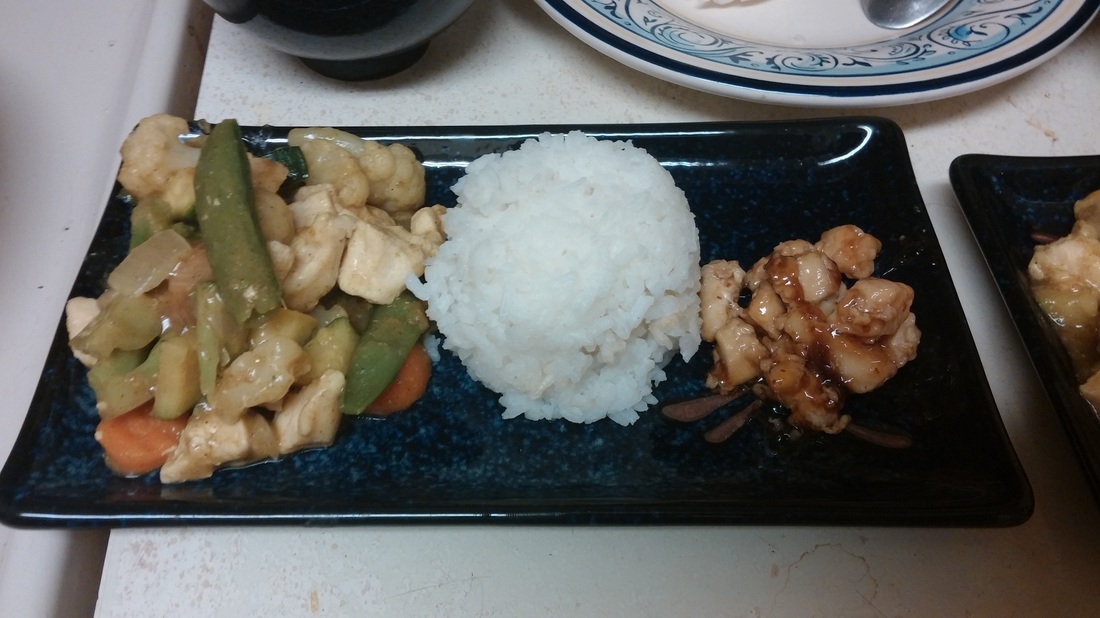 I have a confession to make: I've never eaten curry before. I've always wanted to, since I've heard that it's spicy and I'm a sucker for all things spicy. So, after craving this new experience for a few weeks, I finally gave in and bought some curry mixture stuffs when the mister and I went to the store. More specifically, I chose a Thai green curry paste since they were out of the red that I had wanted. In the midst of mourning over the loss of the red paste, the super sweet mister had scoured the Wal-Mart shelves and found a little pack of something called Golden Curry. Happiness restored! 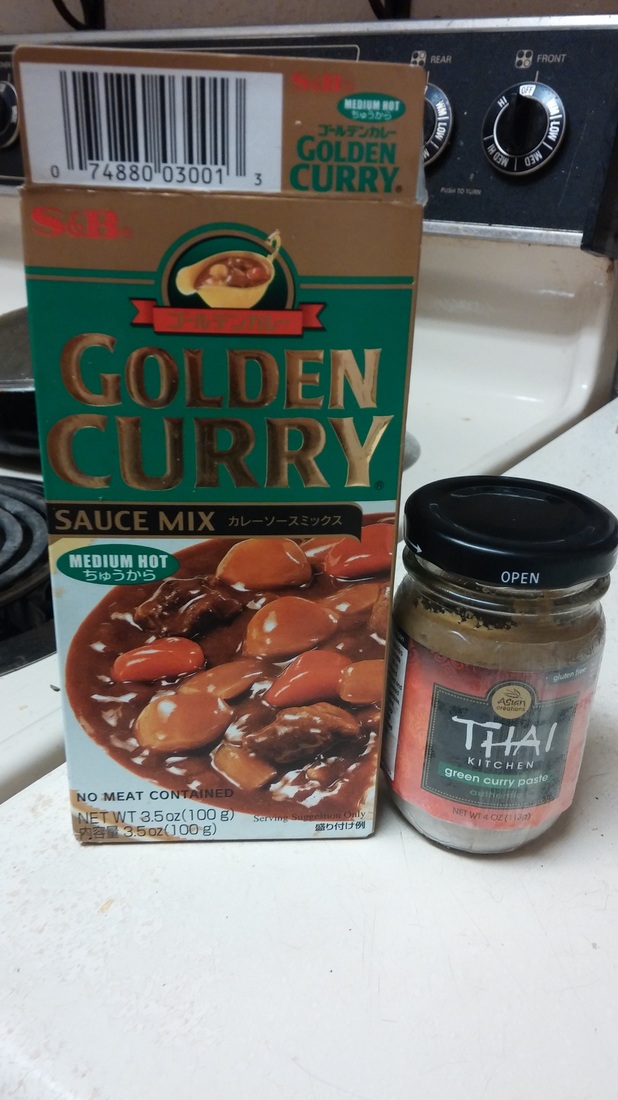 This dinner was really created out of a desire to experiment with something new, along with a little slice of something familiar for the every-so-picky hubby. We have a bottle of Panda Express Orange Chicken sauce in the fridge, the mister's favorite, so I decided to make a bit of that to keep him satisfied in case he hated the two curry flavors. Japanese, Thai, and (American)Chinese flavors rolled into one dinner? Yes, please. I even set aside my supposed low-carb diet and indulged on white rice. For authenticity, of course. Plus, it was also an excuse to break out my adorable Japanese dining set that I bought months ago and haven't really used yet.

So, I researched the hell out of curry recipes, finding and altering the recipes to suit our tastes. And, surprisingly, it came together AMAZINGLY. Confession, though: neither of the above products were NEARLY as spicy as I had hoped, not even close, but with some sirachi (sriracha?), it was EXCELLENT. In my opinion. Here's how I did it. 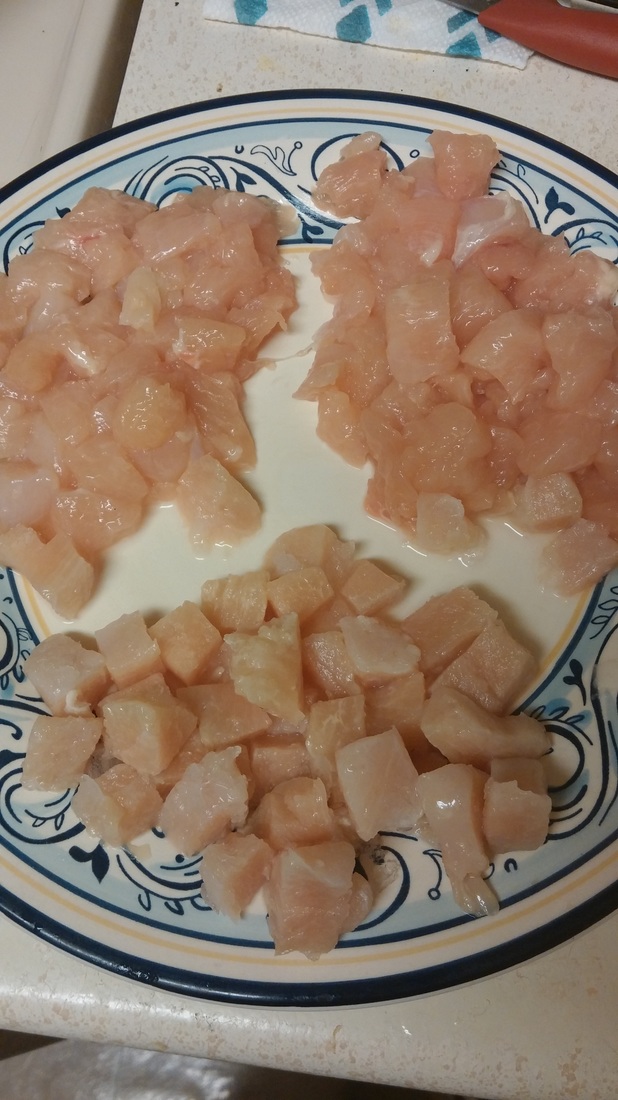 Dice up your chicken breast. I used 2 breasts, one big and one small, because the Mister likes to pick out his chicken and leave the veggies behind. Since I was using 3 different seasonings, I separated into 3 piles. Guess which was the fresh chicken, and which was a frozen bagged chicken?? 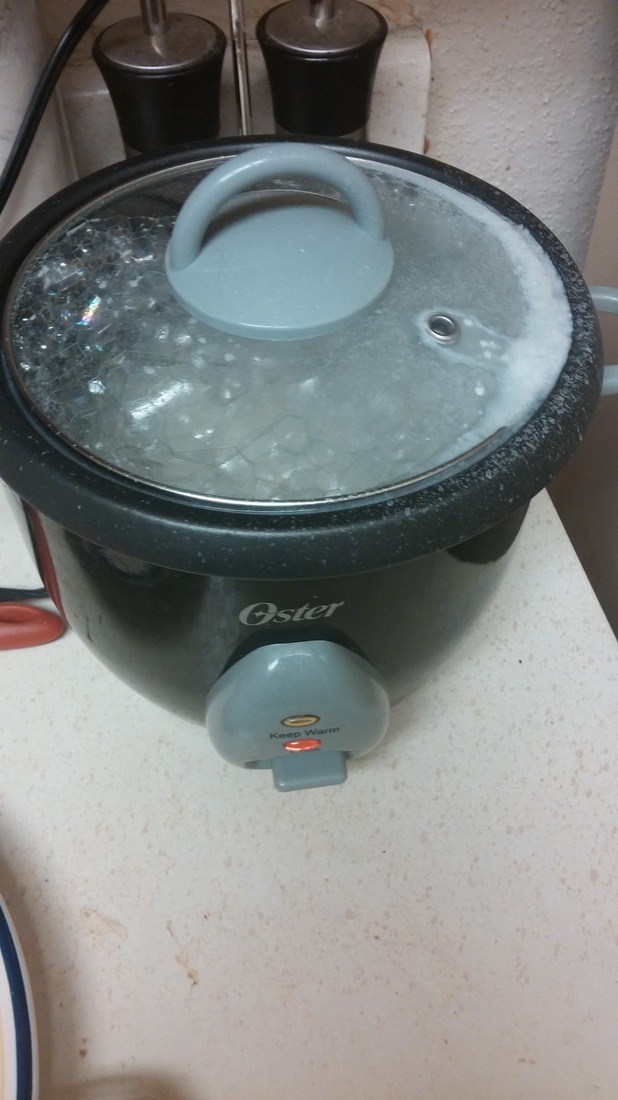 I also threw some white rice into my rice cooker. Is it just me, or does anyone else's rice cooker boil up like this? Either way, I added some salt and a bit of extra water, and surprisingly this turned out to be the best batch of rice that I've ever cooked. So I did what any sane and awesome person would do. 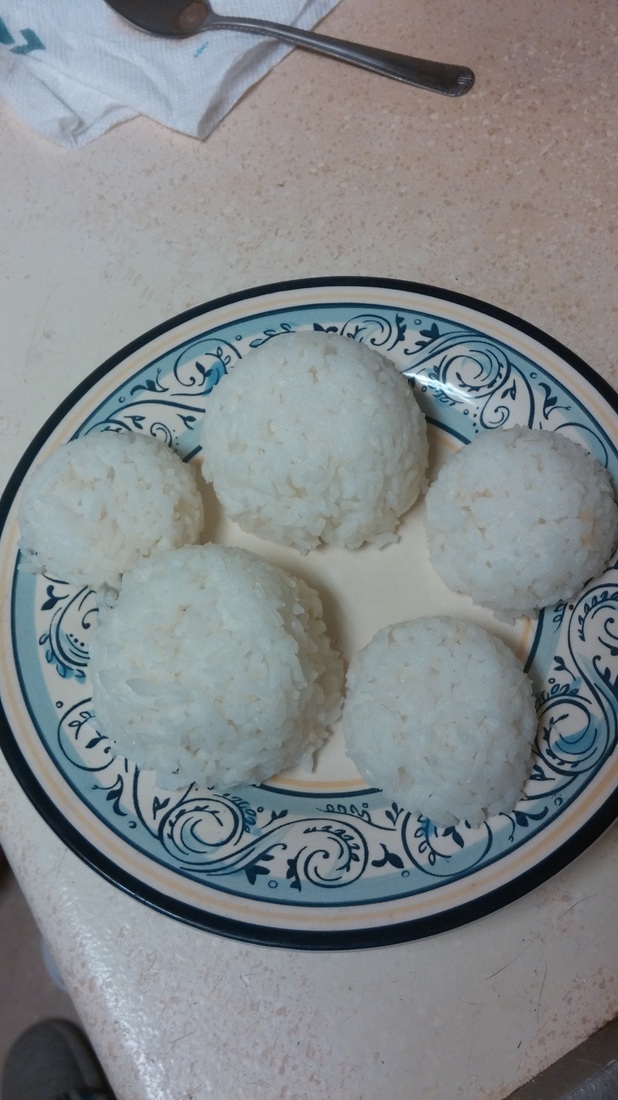 I turned that awesomeness into rice balls! Or, half rice balls, with the aid of a circular-shaped measuring cup.
On the left is the Japanese Golden Curry mix, and on the right is the Thai Green Curry mix. This is how it looked on my stove as I cooked it with only slight difficulty, simultaneously. Along with garlic powder, onion powder, fish sauce, and a dash of Knorr Chicken Bouillon with less than 1/2 cup of water each, I also tossed in the same type of veggies for both: sauteed onions, fresh zucchini and squash, plus frozen broccoli, cauliflower, carrots, and just a few snow peas (I horde those dudes since I love them so much). Oh, please pretend that the following image is on the right back burner. I kinda felt bad for that little guy, since I've used him maybe 3 times in four years... 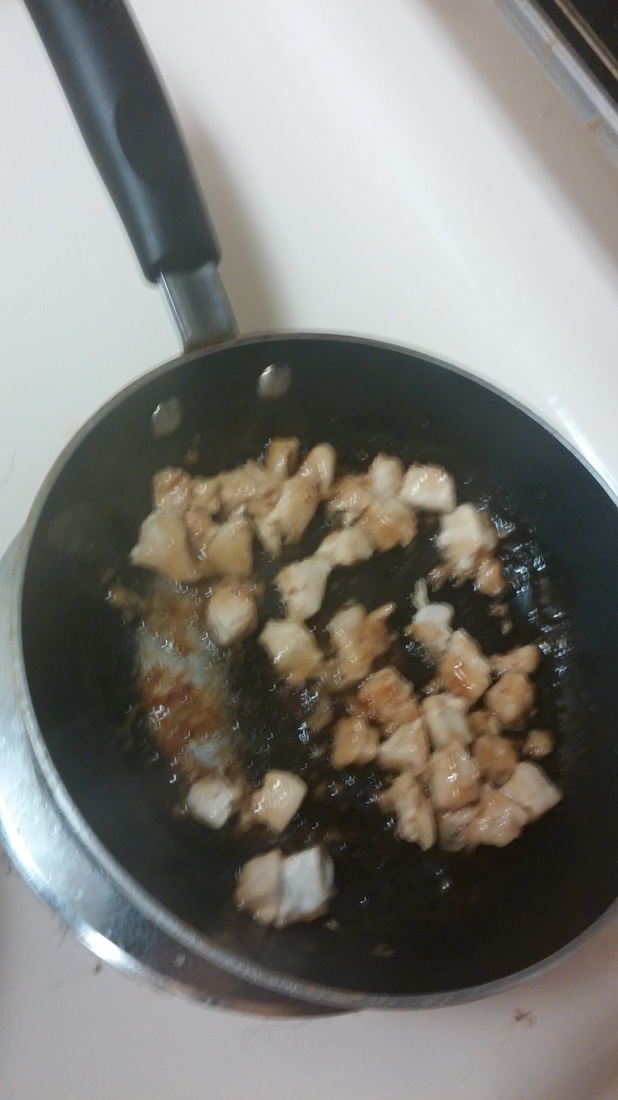 That's the orange chicken. It's blurry and indecipherable and frankly unimpressive, but that's the only picture that I took of it cuz the curries were cooking way faster than I had anticipated. I guess that I can't even call them curries anymore, because they came out more like stir-fry's and less stewy, which was what I thought that they were supposed to be. Whatevs, the taste is all that matters, right?? 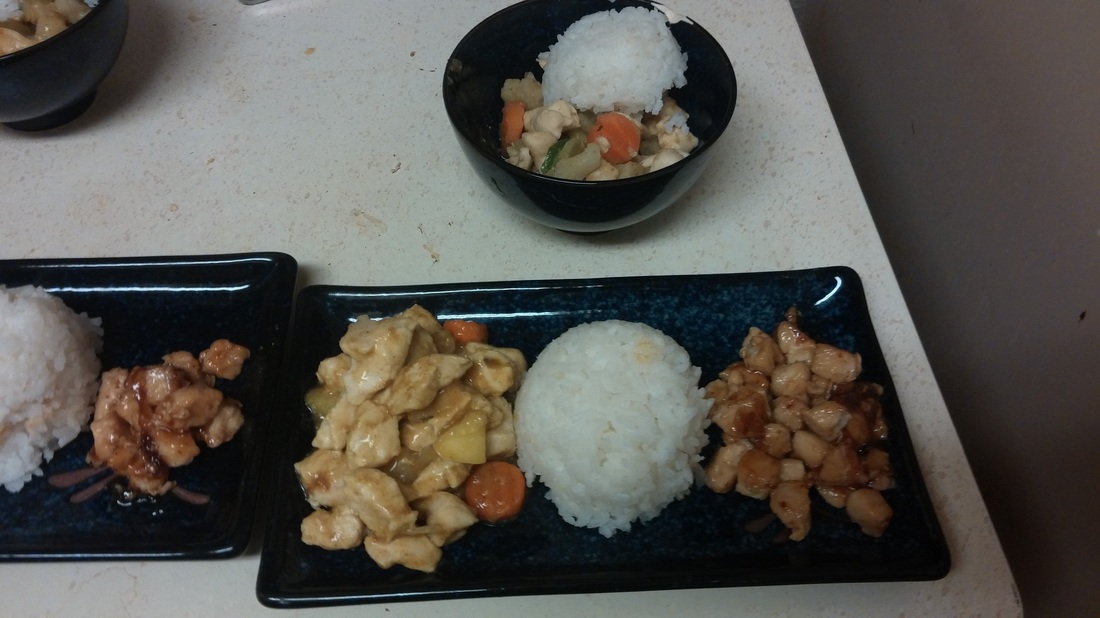 AND SO! The green curry was slightly soupier-ish, so after much debate (which took place in my head, before cooking), I decided that this would be the curry to go in the bowl. And, of course, it was topped with one of the smaller cutie rice balls that I had made. 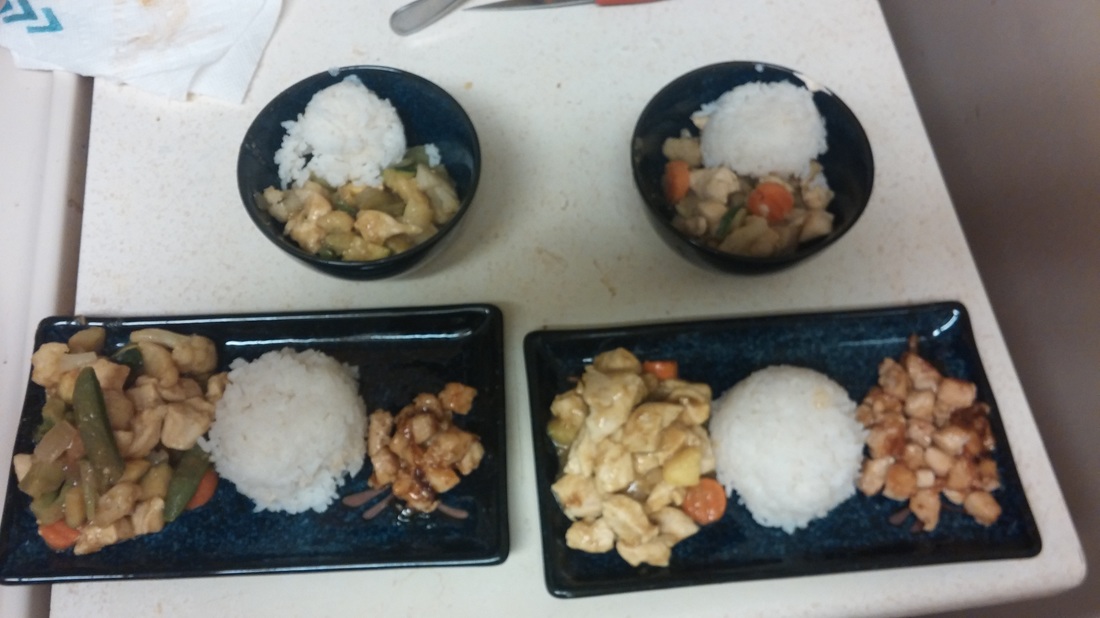 On the plate: one of the bigger rice ball-y guys in the middle, golden curry on the left, and orange chicken on the right. Guess which plate is mine?

Yeah, it's the lefty, You can tell by the smaller amount of orange chicken, and the obvious veggies in the curry. 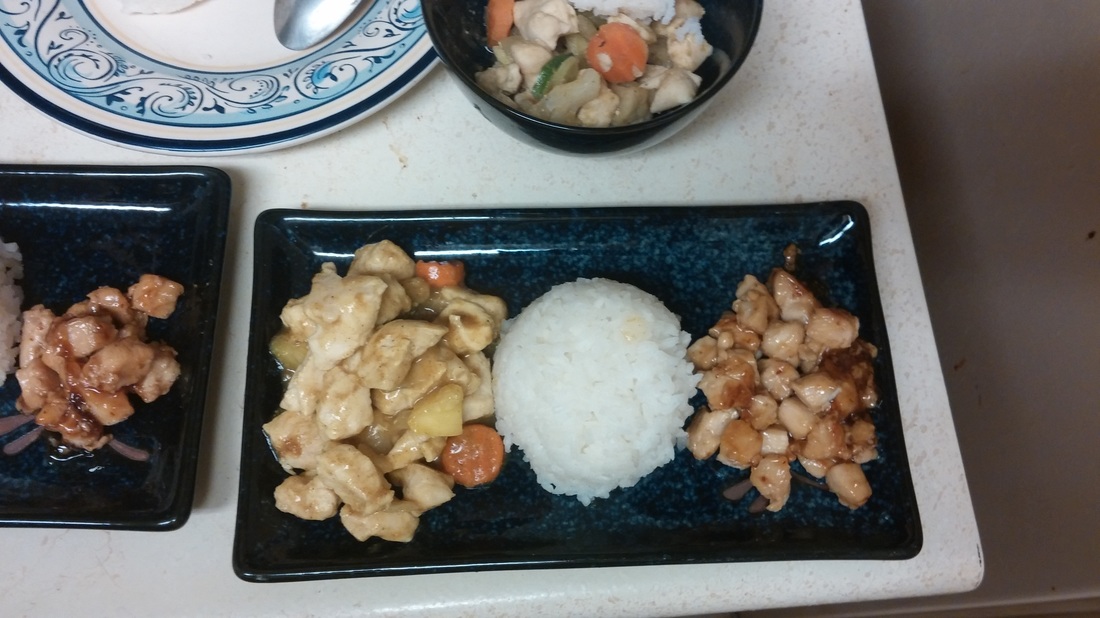 Tell me that doesn't look great, though??
I ended up preferring the flavor of the golden curry, so I mixed some of the (super small amount) of sauce into my green curry bowl. YUMBO! I've officially decided that this is how I'm going to make curry permanently. With the bit of sirachi (sriracha?) in mine, it was perfectly made, and it was something that I would love to have again. The mister simply requested more orange chicken next time (he loves his usuals LOL), but I suppose it's my bad for combining a known deliciousness with a new experiment.
Powered by